How to index – Registry of Deeds Index Project

Let us start with a memorial of a deed. All the memorials up to 1929 are available through familysearch.org, see the link at the bottom of this page. To see them you will need to register on familysearch.org. This is free and quick to do.

The words in a deed: 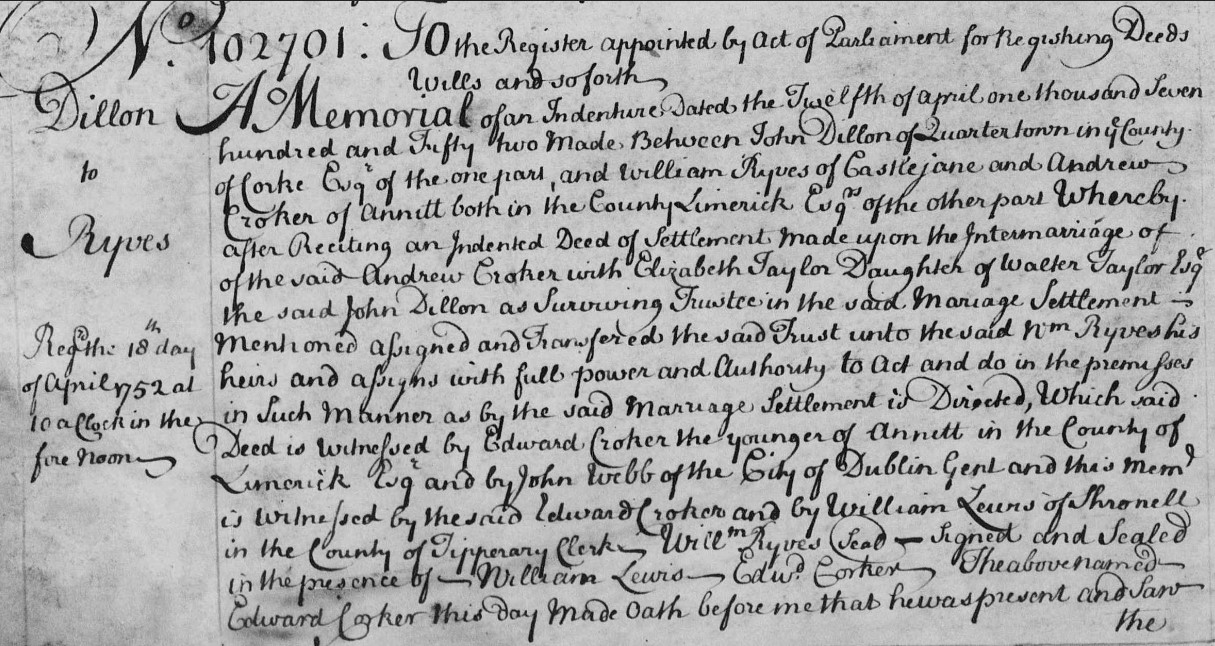 This is a transcription of the above memorial

To the registrar appointed by Parliament for the Registering of Deeds, Wills and so forth. A memorial of an indenture dated twelfth of April one thousand and seven hundred and fifty two made between John DILLON of Quartertown in the county of Cork Esqr of the one part and William RYVES of Castlejane and Andrew CROKER of Annitt both in the county Limerick Esqrs of the other part Whereby after Reciting an Indentured deed of Settlement made upon the marriage of the said Andrew CROKER with Elizabeth TAYLOR daughter of Walter TAYLOR Esqr the said John DILLON as surviving trustee in the said marriage settlement mentioned assigned and transferred the said trust unto the said William RYVES his heirs and assigns with full power and authority to act and do in the premises in such a mannor as by the said marriage settlement is directed, Which said deed is witnessed by Edward CROKER the younger of Annett in the county of Limerick Esqr and by John WEBB of the City of Dublin Gent and this memorial is witnessed by Edward CROKER and William LEWIS of Shornell in the county of Tipperary Clerk.

signed and sealed in the presence of
William LEWIS and
Edward CROKER.

The above named Edward CROKER this day made an oath before me that he was present and saw the deed whereof the above is a memorial duly signed and perfected by John DILLON the perfecting part and was also present and saw the above Memorial duly sealed and perfected the above named William RYVES and deposes that he this Dep[onen]t is a subscribing witness to the said deed and memorial Edward CROKER Taken and sworn before me at Duntrileage in the county of Limerick the 13 day of April 1752 in virtue of a commission to me directed for taking affdts in the county and I know the Dept. Geo BLACK Hu MASSY Francis WHEELER

The following is my indexing of the above memorial. You can see how the bolded data appears below. I have used the letter appearing in the left-most 'No column' as shorthand in the abstract. i.e. intermarriage of C and D is used instead of intermarriage of Andrew CROKER and Elizabeth TAYLOR. The "A" in the righ-tmost column indicates that that person signed the memorial. Note a witness to the memorial (WM in the current role column) has an A in right-most column. A witness to the original deed may may not sign the memorial, although one witness should sign both the original deed and the memorial.

The following is my notes from another memorial. It follows the format above. (Yes I can read it, mostly!)

I use an Excel workbook to convert my notes into the database format. What I type in the worksheet is below.

These data appear in the following form on the website.

Note the information in rows 15 and 19 has been joined together in the abstract on the web site.

The important facts that the volunteer should aim to capture for each person mentioned in the are the following fields using the example of person A in the above abstract the Hon Thomas COOTE.

Note that not all fields have entries. In the above deed there is no mention of an earlier deed so, for example, "Role in earlier deed" is blank.

If you do not use spreadsheets you can submit your index entries using this form.

Note that there is a tick in the box below the B in the leftmost column. This indicates that Thomas WILSON signed the memorial.

I use the shorthand "P1" for "party of the first part" etc; and "O adj" for "occupier of adjacent land". The link at the top of the form explains more of the codes used. See notes for completing the form